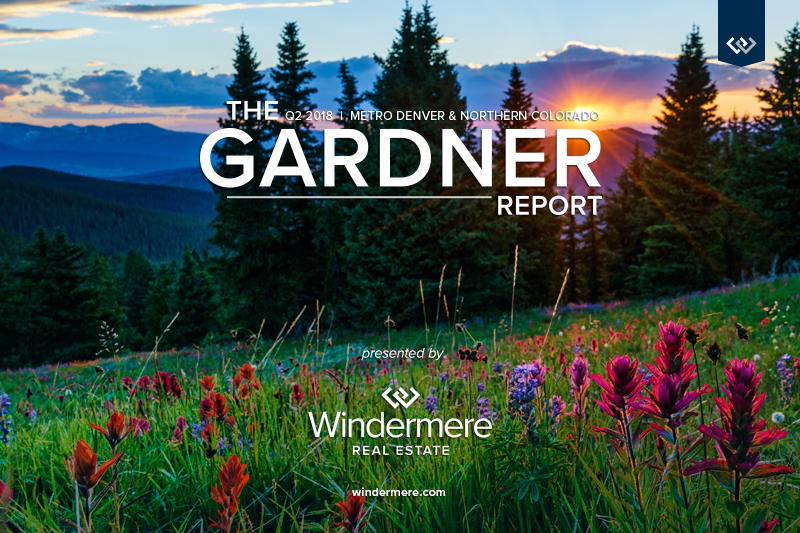 Colorado continues to see very strong job growth, adding 72,800 non-agricultural jobs over the past 12 months—an impressive increase of 2.7%. Through the first five months of 2018, the state added an average of 7,300 new jobs per month. I expect this growth to continue through the remainder of the year, resulting in about 80,000 new jobs in 2018.

In May, the state unemployment rate was 2.8%. This is slightly above the 2.6% we saw a year ago but still represents a remarkably low level. Unemployment remains either stable or is dropping in all the markets contained in this report, with the lowest reported rates in Fort Collins and Boulder, where just 2.2% of the labor force was actively looking for work. The highest unemployment rate was in Grand Junction, which came in at 3.1%.

For the second quarter of 2018, I have moved the needle very slightly towards buyers as a few counties actually saw inventories rise. However, while I expect to see listings increase in the coming months, for now, the housing market continues to heavily favor sellers.

Matthew Gardner is the Chief Economist for Windermere Real Estate, specializing in residential market analysis, commercial/industrial market analysis, financial analysis, and land use and regional economics. He is the former Principal of Gardner Economics, and has more than 30 years of professional experience both in the U.S. and U.K.

Related Articles
Real Estate Q1 2021 Metro Denver & Northern Colorado Gardner Report Click to download the Q1 2021 Metro Denver and Northern Colorado Gardner Report
About the area 14 Times For the 14th time this year, 30-year mortgage rates set a record and hit an all-time low. Based on data just released by Freddie Mac, rates are now at 2.71%.  Their weekly survey of the 30-year mortgage rate dates back to 1971. Just one year ago rates were at 3.68%. So, what does this mean […]
Buyer Tips Remodeling Impact Americans spend $400 billion per year remodeling their homes. So, which remodeling investment gives the best return when it comes to resale value? It should come as no surprise, especially leading up to Thanksgiving, that the best money to spend upgrading your home is in the kitchen. It’s the place where most homeowners spend most […]